Last night in Juba none of us got any sleep. Everyone’s exhausted. I’ve had an hour and a half of sleep in the past 48. So the team decided to not stay in the church tonight but spend one night at a hotel. I frankly would rather have slept in the church. I have slept very well there before, and probably would have tonight.
Nevertheless we’re here at the hotel and I’m good with that.
Now, my review.
We trekked through thick mud to get to the front door. The floor is mostly torn up linoleum with exposed subfloor. My door has been kicked in on at least one occasion. There are spiders all along the ceiling. The bathroom walls are covered in mildew, the sink drains onto the floor, there’s a large live beetle floating in the toilet, and the shower is what’s called a widow maker. If you don’t know what this is, it’s basically like hooking up a waffle iron in the shower head to heat the water as it comes out. Touch it, or any other part of the metal pipes while your taking a shower and you get shocked. Sometimes if there’s a steady enough stream you can even get a shock straight through the water. Also, I had to use a piece of torn linoleum to plug the sink so I could wash some clothes. There’s thumping music coming from outside.

The pluses: There’s working air conditioning. This is a huge plus. There’s a tv, though I haven’t checked if anything comes in yet. The bed is flat, and I don’t see any holes in the mosquito net. There’s running water, and a western toilet complete with seat, (also huge pluses). The door lock has been repaired and I don’t have to sleep with a shank tonight.
You would probably assume by now that I’m complaining and demand the immediate beheading of the manager. But you’d be wrong, because I know something you don’t. This is Africa, of TIF, if you haven’t heard the term used. More specifically, this is South Sudan. This is not the west. There are simply certain ways that things are here, and there’s no use getting upset about them. If I can sleep here tonight, be cool, and not catch some horrible disease, that’s great and I wouldn’t ask for more. In fact, I’d probably stay in a place like this again. Heck, I’ve stayed in worse. (I’m not kidding).
So I summary, if you saw on trip advisor under comments, “the bed was flat”, you might not stay there. But this is not trip advisor,and this is not the west. TIA.
Oh, by the way. I checked the tv, and there is only one prong left on the plug. So no, it doesn’t work. 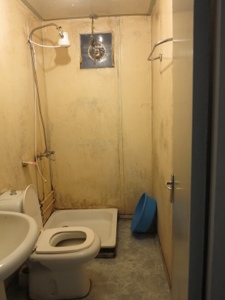