I looked at the calendar today and it’s only twenty days until I leave for South Sudan. To be quite honest, I have a bit of nervousness about going, as I usually do. The lyrics above are from the album Fathom, by Moral. It’s really an excellent album for those inclined toward industrial music. For those who think Christian music is all about easy listening, I would say that sometimes worship is a battle cry, and not a hymn. I love how complex spiritual concepts are distilled into pure, simple phrases. 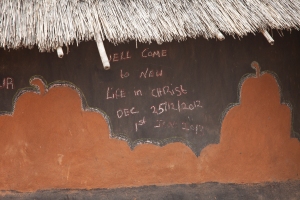 As Americans, we are lulled into a false sense of security  and apathy about things within the spiritual realm. Just as a nation at war can tell itself there is nothing bad going on if the war is taking place on foreign soil, so the church tells itself there is no spiritual warfare because we’ve told ourselves there is no fight. I can tell you that there is, and the only reason we don’t see it is because we choose not to engage. A nation that chooses not to fight is not a nation at war, it is a subjugated nation.  And the people that are the most enslaved are the ones who are enslaved but choose not to recognize it.

I have the same kind of nervousness when going into South Sudan as I used to at the start of a race when I used to race mountain bikes. I imagine it’s what soldiers must feel just before they’re deployed, though I don’t know that. The fact is that there is an entire other world just below the surface. One side fights for the spiritual freedom that comes when we deny ourselves and follow God, the other side fights for our consumption. One fights for self, the other for selflessness. One fights for disease and starvation, war and destruction, the other for completeness and eternal life.  South Sudan is on the front line of this fight. It’s on the border between the middle east and Africa, on the border between Christianity and Islam, on the border between slavery and independence, between war and peace, between Christianity and animism, between oppression and freedom, between death and life. There’s so much at stake it’s hard to fathom.

I had a conversation recently with a friend who is under the common impression that if you’re nice to people, they will be nice to you. His words were, “Be honest, when you go over there to help people, you wouldn’t expect to be attacked.”  I had to correct him, that on the contrary, that’s always a possibility, and I would be naive to think otherwise.  The physical and spiritual forces that have sway in the land profit from war and chaos. You might go to help people, but that doesn’t mean everyone wants you there. There might be people who hate the ones you’re helping, and consequently hate you. In any chaotic situation, there will be those who profit monetarily from the situation. They don’t want you there either. Furthermore, just because someone his been oppressed does not make them angelic. If that were true, every nation lifted from oppression would suddenly thrive.

So why go, if in fact no good deed goes unpunished? That’s a complicated question, and one that is not going to make sense to a lot of people, Christians included. Paul talks about “God’s wisdom is foolishness to the world.” This is entirely true. If in fact all we see is what’s right in front of us, then no, it makes no sense. If there is no God, or if we choose not to follow Him, then self-preservation and self-glorification is the highest possible goal, though still not an attainable one.  If on the other hand, God has set eternity within our bones, or as Ecclesiastes 3:11 says, “Yet God has made everything beautiful for its own time. He has planted eternity in the human heart, but even so, people cannot see the whole scope of God’s work from beginning to end,” then I live in obedience to Christ. And I would rather live in obedience to Christ, even if he sends me to South Sudan, than to live in disobedience and stay home where it’s “safe”.